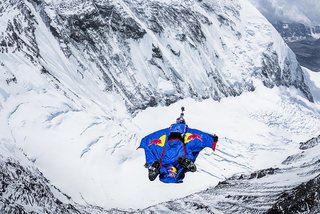 There was nothing easy about this accomplishment! In order to become the highest base jumper in the world, Valery Rozov (48) had to climb the greatest mountain on earth to reach the North Face and then fly off of it. At 7220ft above sea level, that is simply unreal…

Nearly 60 years to the day after the first ascent up Mount Everest, Russian extreme sport star Valery Rozov (48) flew off the north face of Mount Everest – the world’s highest BASE jump ever – 7220 meters (23,688ft) above sea level.

The ascent began on the Chinese side on the famous north route. It took him four days to climb from the base camp to the jumping location. At precisely 2:30 p.m. local time he leaped despite adverse weather conditions with temperatures -18 Celsius.

Because the cliff at the top was not very high, the initial moments of the leap in the rarified high altitude air were the most critical phase. Rozov needed more time than usual in the thin air to transition from freefall to flying. After that he flew for nearly a full minute at speeds of about 200 km/h (125 mph) along the north face before he landed safely on the Rongbuk glacier – at an altitude of 5,950 meters.