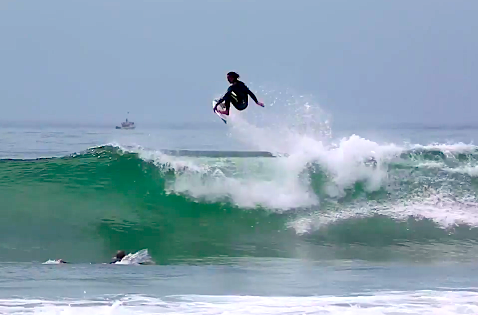 Ok, so the air festival we were all expecting has turned into the small wave carve festival and thats great, because no man alive can grind out a monster carve on a tiny wave like Jordy Smith (For that matter he has the mind boggling airs ready to go too!). Kelly And Joel have fallen, while Mick Fanning is still in with a chance in Round 5. The curve ball, Mick now faces Jordy’s mate and fellow South African, Travis Logie, who on the small rights at tiny Trestles is probably looking the most dangerous he has ever looked! So, in an ideal world we have Travis beating Mick and both South Africans go onto the finals where Jordy will win as he cannot be beaten at this point in small mushy, Dairy Bowl like Trestles. Suddenly Jordy is almost tie with Kelly and Mick and we have one banger of a World Title fight as the tour jets off to France. “Ok kai you feeling a little overconfident of your Saffas,” you naysayers will say! I answer with this statement by Jordy, “I am Psyched!” – the man is relaxed, hungry and surfing like a fleet footed ancient Greek God of surfing.
The man is on a roll and the wave is his bitch! Just check this free surf footage from before the Hurley Pro and tell me I am wrong… (Oh and Travis, its your time to bru!)