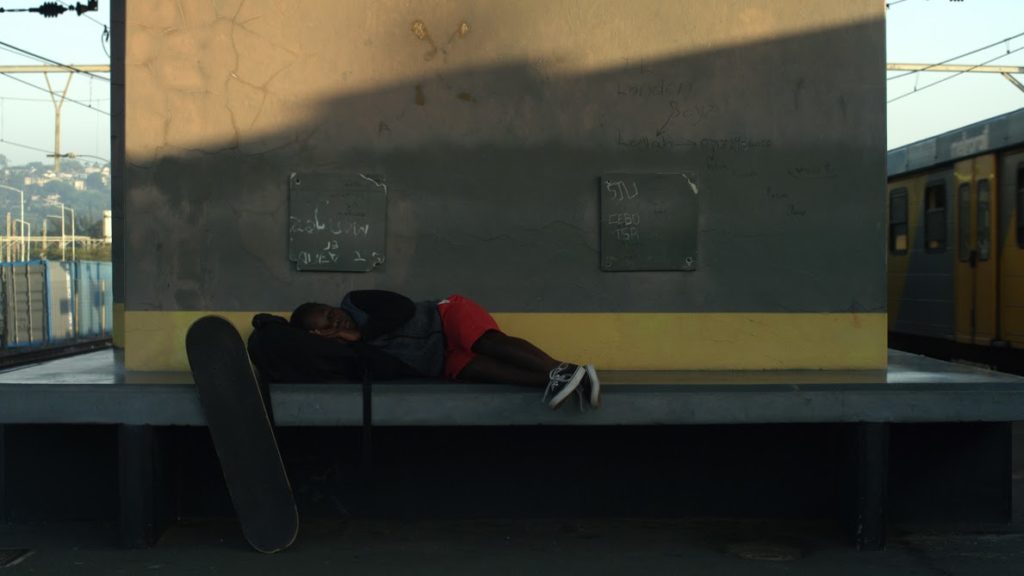 I have to say, especially knowing the young man this is based on, I was really touched by the sincerity and honesty of this short film. Made by Calvin Paul Thompson, Thando, tells the story of a young boy, Thando, growing up in the township, who loves the ocean. His father introduced him to this magical place, but after he dies, the kids life spirals down a path many in the informal settlements end up experiencing.

Drugs, crime and violence become reality, resulting in Thando running away from home and becoming a street kid, at an age where most children cant go to the shops on their own. But, there is a positive message to be taken from this story and I only hope that, Calvin gets more funding, to complete the full story.

Interview with the Filmmaker

I asked Calvin if it was indeed ispired by former street kid and pro surfer, Ntando Msibi?

Calvin:  I know you’ve had your own relationship and experience with Ntando, so it’s cool to talk to you about this. The film’s storyline is entirely based on Ntando Msibi yes. He was going to feature in the final scene but unfortunately I couldn’t organise to shoot it before the DIFF submission date closed. So he wasn’t really directly involved in the actual production, but we always spoke about making a narrative based on the stories he’d tell me about growing up in Kwamashu and running away from home. And I wrote the script based off notes I made talking to him at the surf project years ago

I really wanted to know if there will be a sequel, that continues the story of Thando, from the streets to becoming a Pro Surfer?

Calvin: Yes I’d like to make a sequel/follow up if I can raise funds for a decent production, I’d love to do another film with Surprise acting – he’s a real champ and a dream to work with bru.

Surprise is one of my favorite little groms from Durban! He has just started competing too and expect some big results from him in the future.

Lastly I asked Calvin why he made this project?

Calvin: My friendship with Biggy, combined with my my keenness for filmmaking I guess, is what made me wanna make the film in the first place. I wanted to make a story that had some truth and meaning, rather than just for the sake of fancy visuals and effects etc. I wanted to put people in the shoes of Ntando for a few minutes, and see how it must have been growing up for him. This short film obviously didn’t have the space to do that justice, but it gives the audience a taste at least. Getting to the truth behind Ntando’s back story became a fascination of mine while getting to know him, because everyone’s always had their own version and opinion on it, so when I finally sat him down in like 2015 and got some real facts straight from him, turning it into a film was inevitable I guess.

I highly reccomend watching this inspiring film. You can watch Thando below:

Thando from Calvin Thompson on Vimeo.

Giants of big wave charging on the latest edition

Today at 1pm the premier of #thelockdown with @mik

Tomorrow (supposed to be today but @cellcsa droppe

This sums up my vibe right now. Waiting... this is

Happy birthday @volcom 🎉 Stoked to be a part of