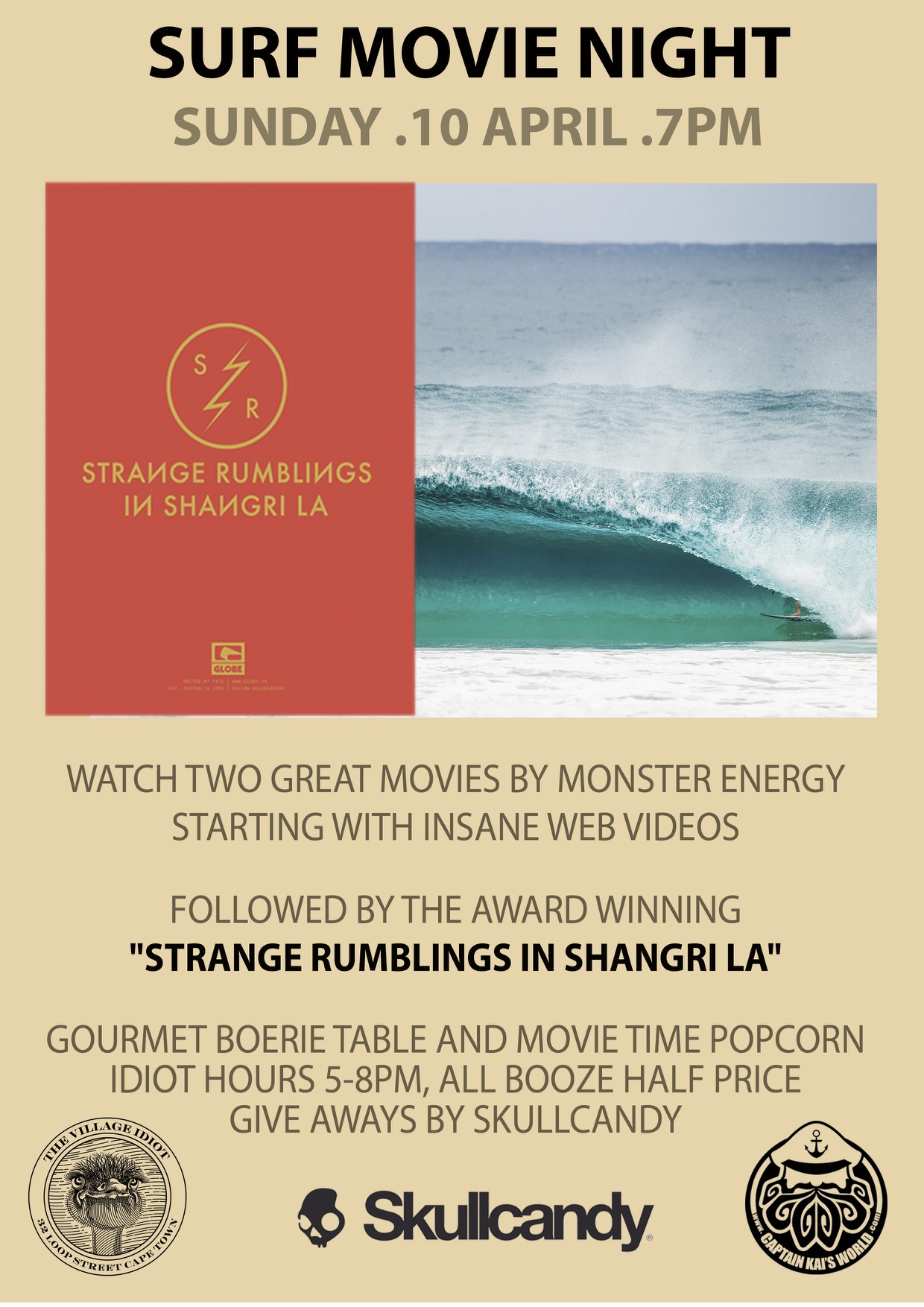 One of the best and most awarded surf films ever, Strange Rumblings in Shangri-La will blow your mind. When combined with a batch of insane short extreme films instead of trailers, half price drinks and gourmet braai on demand, well Sunday just got a whole lot better!

Join me at the Village Idiot this Sunday for the Skullcandy Movie Night with Monster Energy! Event info here – https://www.facebook.com/events/236670303353262/

Directed by JOE G and featuring GLOBE surf team riders DION AGIUS, NATE TYLER, TAJ BURROW, YADIN NICOL, DAMIEN HOBGOOD, CREED MCTAGGART, CJ HOBGOOD, ALEX SMITH, NOA DEANE, BRENDON GIBBENS, and MORE – STRANGE RUMBLINGS IN SHANGRI LA is a modern surf film that documents an unforgettable worldwide journey from the frigid shores of ICELAND to the sultry coastline of MOZAMBIQUE. From well-known spots in EUROPE to exotic islands off the coast of BRAZIL and into DEEPEST INDONESIA, this is their greatest adventure yet.

STRANGE RUMBLINGS IN SHANGRI LA from GLOBE on Vimeo. 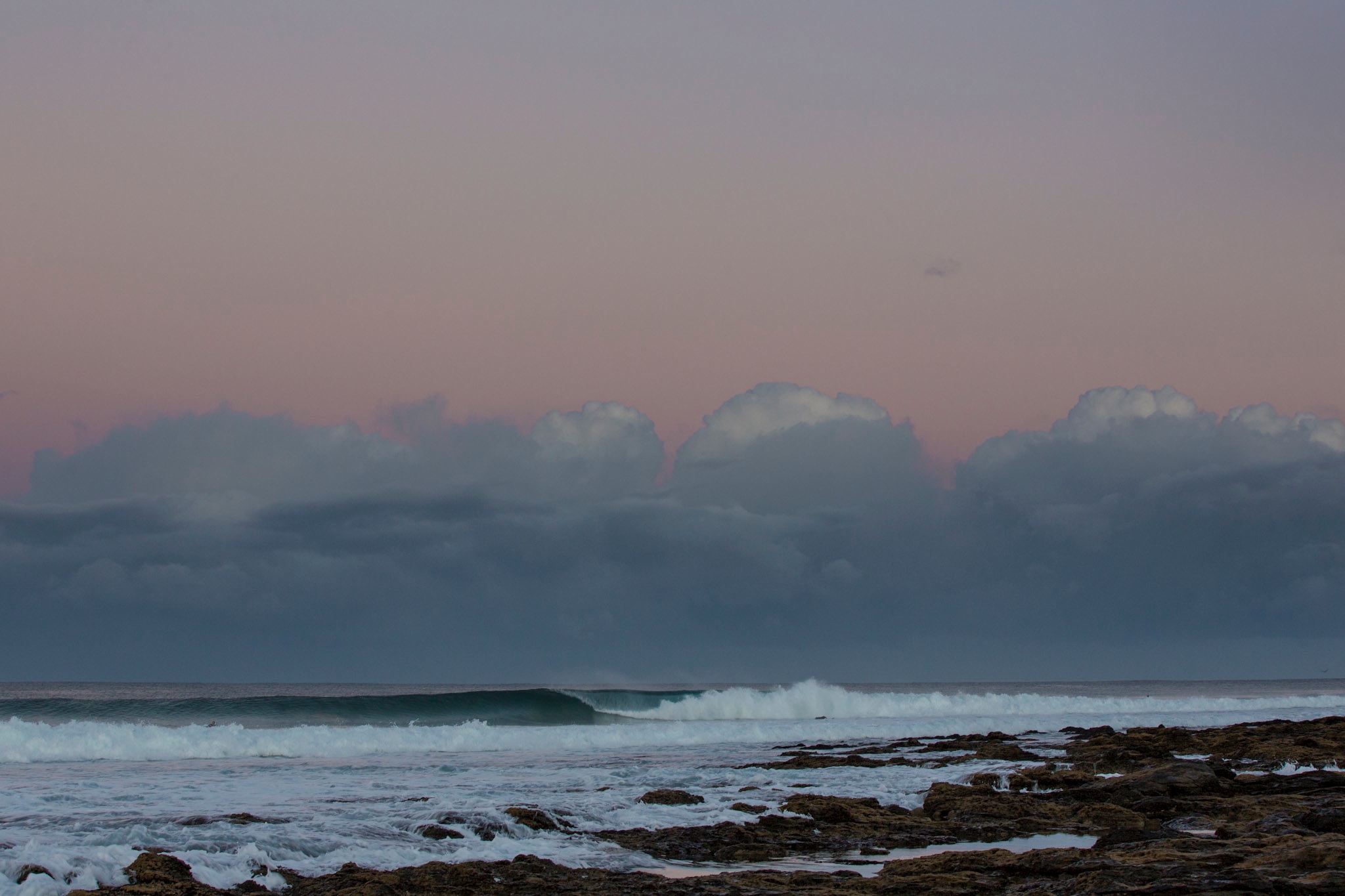 It seems pretty calm on the beach at Supertubes. The sun is out, there are small perfect waves flaring down the point and there is a sense of anticipation building as the forecasted swell should arrive for Saturday. Take a look at what went down in Round 4 and I preview the 3 guys, Taj Burrow, CJ Hobgood and Freddy Patacchia, that should be super deadly if the waves go 8-10ft. 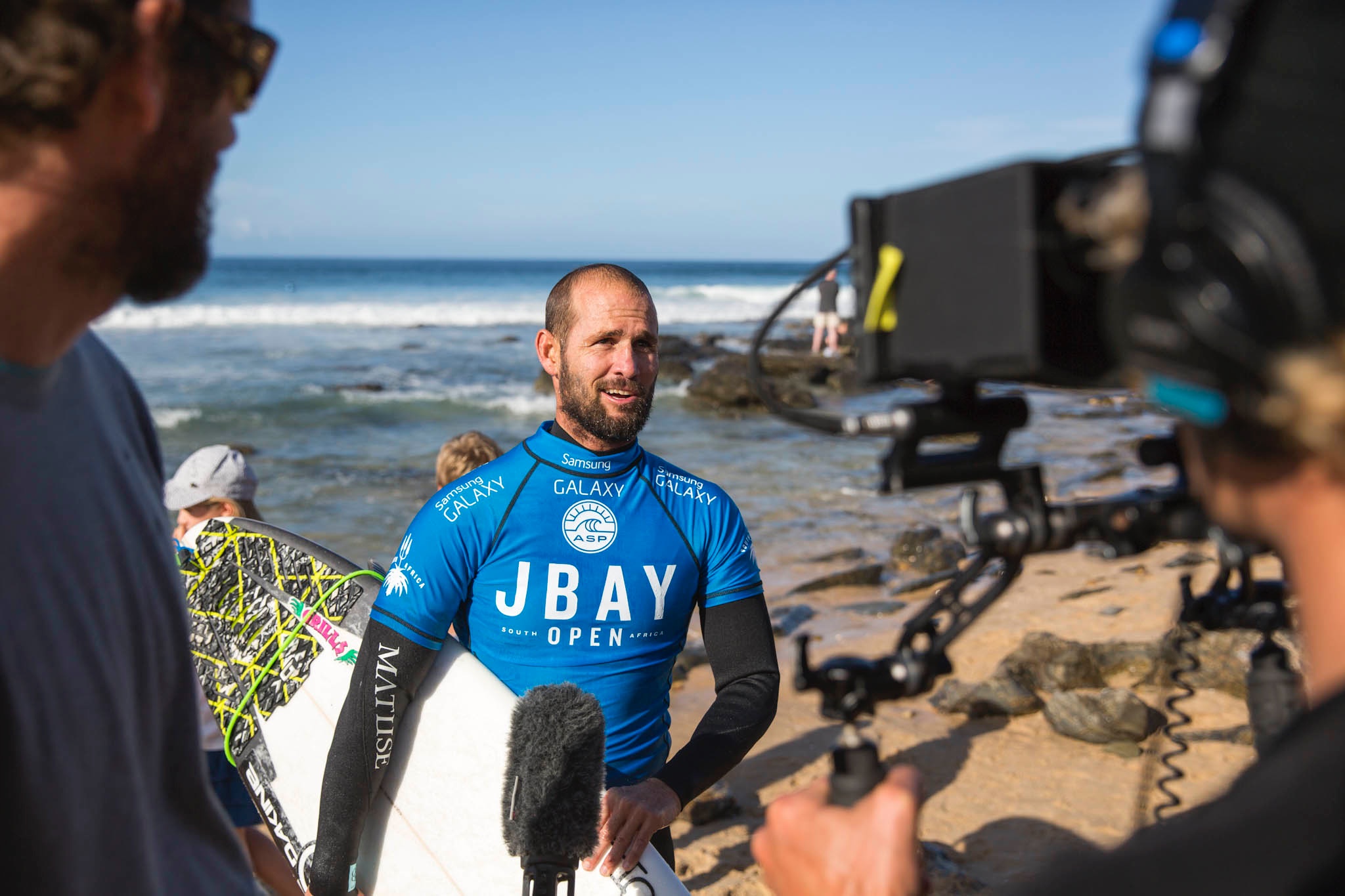 Just look at the bemused smile on CJ Hobgood’s face after knocking out the favorite, Jordy Smith. CJ must have been wondering how he did it, but I can tell you how, he stuck to the gameplan. Jordy wanted to impress his home crowd so much he tried too hard and ultimately it hurt him. Going for the massive layback snap and going down, all he had to do was 3 more average turns and he would have got the middling 6 points he was after. The crowd sighed in disbelief and CJ was left smiling on the beach wondering how he pulled off such an incredible win against the odds.

Another Goofy who put it to the odds was in form surfer, Matt Wilko, not only beating Kelly Slater in their Round 3 match up, but putting the King in combo land. I don’t think many people called that one. Josh Kerr, Taj Burrows, Mick Fanning and Joel Parkinson stuck to the Jbay script and dominated their encounters. One more upset was on the cards though, as Alejo Muniz took out World Number 2, Michel Bourez.

There was great surfing and we are now ready for Round 5 and the final day of surfing. Hopefully the swell forecasted for the weekend arrives.

The waves were around, but the Jbay Open only saw the close of Round 2. The goofy footers were on fire with CJ Hobgood and Miguel Pupo leading the charge. Jbay is packed and there has been loads to do for the tourists with the Jbay Winterfest offering Rally, Drifting, skateboarding, Enduro and much more. Check out the highlights from my weekend…