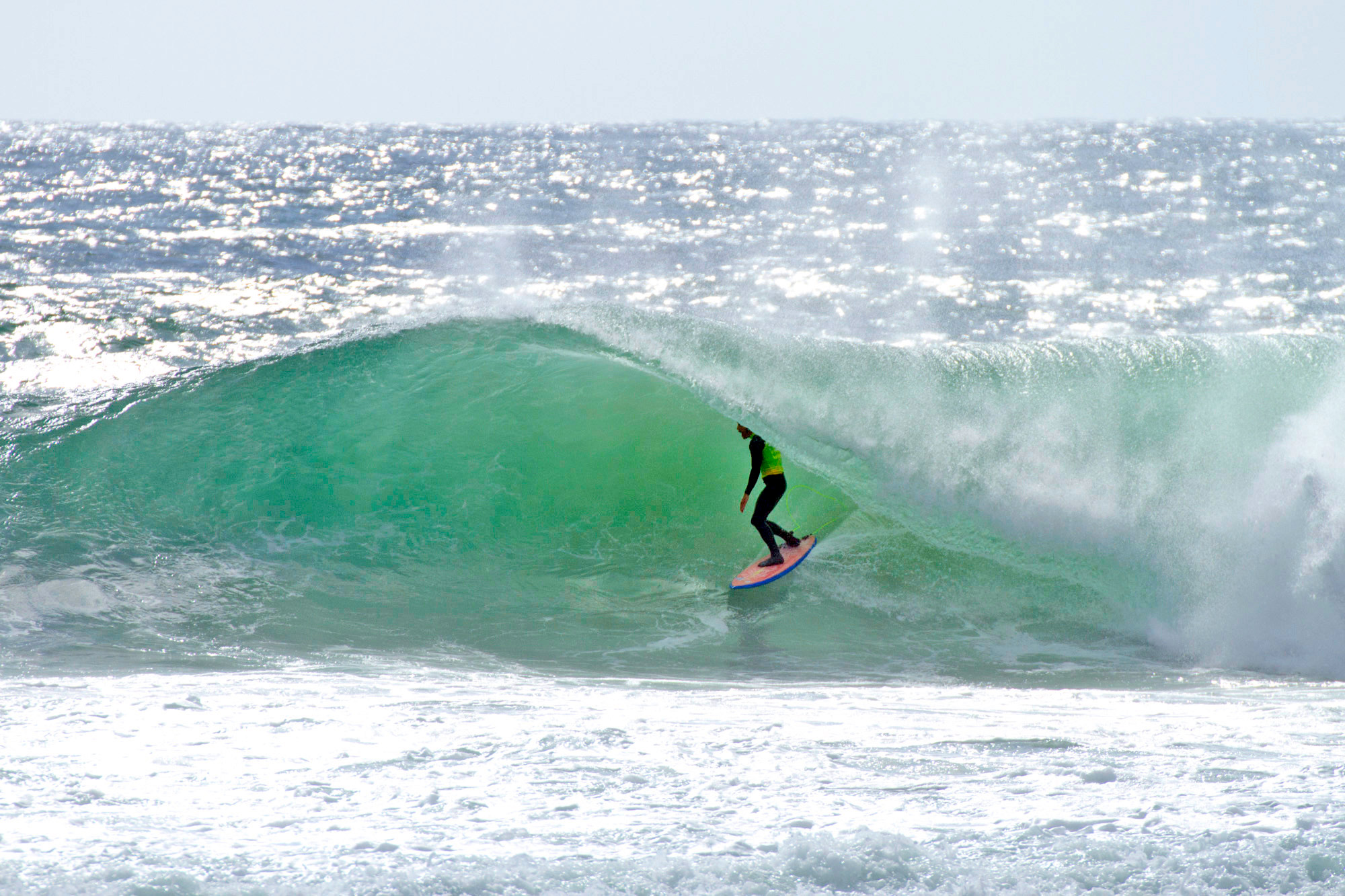 With a grey and rainy start, the ocean looking wild and stormy, many were wondering if the event would start, but organisers and locals decided it was time to test the surfers at the Rolling Retro at Llandudno Beach. With this year’s Mexican theme the patch at the Lifesaving Club was bright and cheerful as apposed to the vibe in the water where close out sets and double overhead conditions were quickly making the event be referred to as Rolling Retro, Code Black.

The Bodysurfers were first in the lineup and most competitors were quickly getting busy charging the large conditions with no fear. This threw the challenge out to the surfers who quickly followed suit. As the day progressed the sun started fighting through the clouds and the performances in the water kept the growing crowd very entertained. Though there were many broken boards amongst the free surfers, somehow not one Retro Surfboard was lost – a true tribute to the workmanship of these collectors pieces.

Some of the standouts on the day were led by young Muizenberg surfer, Pieter De Wit, who not only took out the Bodysurfing division but also got one of the best tubes of the day. Representing the Llandudno locals was super grom, Luke Slijpen, who showed some of the old boys what style on a retro board should look like and was the clear choice for the best grom award. Following in his son’s footsteps was local, John Slijpen, who charged the big conditions, but also got a massive lip to the head, winning the best wipeout category. Tanika Hoffman was one of the few ladies to brave the wild conditions and she was rewarded for her charging by taking the Best lady award.

In the last 2 heats, two of South Africa’s best Longboard surfers took to the water, much to everyone on the beach’s delight. Mathew Moir is a two time World Champion and he showed us why, by charging on a 9’2 Longboard on the huge waves. On one wave he somehow recovered from being completely on his back, to the cheers of the crowd. He was followed by Scarbarough’s, Mike Grendon, who went out on an ancient, 20kg, John “Oom” Whitmore Longboard. The Oom must have been smiling down from the heavens as Mike proceeded to charge massive close outs, soul arch down the line and pretty much blow everyone’s minds with his carefree approach to the dangerous conditions. Mathew and Mike shared the hard chargers award.

Amongst the surfers there were a couple of stand outs, with Llandudno brothers Jasper and Logan Eales getting some bombs. Robby Schofield made the trek from the West Coast and got a few pits and did some huge turns to win the best turn of the event. Benjamin Potter and Luke Christie Smith, both sporting ginormous beards, also entertained the crowds both in and out the water. It was Andrew “Roosta” Lange though who had the beach cheering every time he took off on a wave. Taking off on one big set wave, the conditions suddenly went perfect offshore, the light golden as Roosta bottom turned, stood straight up and soul arched through the biggest tube of the day on an old Gerry Lopez Lightning Bolt Surfboard. It was a moment that the entire beach went silent, followed by an eruption of sound as he got spit out the tube. With some stellar turns and floaters added to the mix, he was the unanimous choice for Surfer of the Event.

Throughout the day the Corona bar was pumping and as the day wore on the El Jimador girls served frozen margaritas and tequila shots, to the sounds of Roastin Records, ensuring that the party was heaving by the time the prize giving was done. All food and bar sales went to raising funds for Llandudno Surf to attend SA Champs and their were smiles all round on the their happy faces. The evening ended with the crowd enjoying the acoustic sounds of the Larter Brothers followed by some retro inspired beats by Dj Ike. All in all another insanely fun day was had by all and the Rolling Retro continues to be referred to as the best day of the year!

Big thanks go out to the hard working team behind the scenes, event MC Ilan Sheer, the whole Vudu Surf family and our incredible sponsors El Jimador, Corona, Red Bull, Hurricane Surf, Von Zipper and Gul Wetsuits. The event video will be released in the next few days.