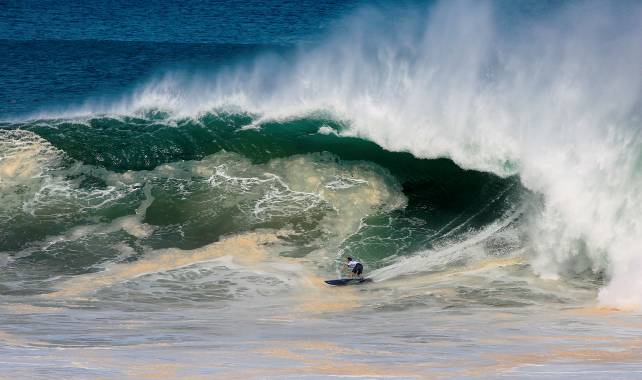 WOW, what an incredible day of big wave surfing. South Africa can be proud as we watched Matt Bromley charge one of the biggest tubes of the day before the contest started, followed by Grant Twig Baker charging into the semi finals – which will go down today! Check out the highlights video below, i know its 16 minutes, but it is so worth it, I promise!

Will Skudin (USA) claimed the heat win with a 22.07 heat total over Baker by only 0.74 points. Rogercin Ramirez (MEX), event wildcard and local favorite, opened Heat 2 with a huge barrel, pulling off a technical exit to earn an authoritative 9.00, which brought the large hometown crowd to their feet.

Ramirez held the lead against the field, but with 15 fifteen minutes left in the 75 minute heat, Skudin and Baker fought back to secure the first and second positions. Skudin, Baker and Ramirez advanced to the Semifinals while BWT heavyweights Billy Kemper (HAW) and Damien Hobgood (USA), along with local wildcard Coco Nogales (MEX) were knocked out of the competition.

“It was hard to find those corners out there,” Skudin said. “It was big and heavy, and I just put my head down and kept on going. I was hoping that eventually I’d lock one down and make a good barrel. Unfortunately, I didn’t make a really good barrel, but I made it through the heat.”

Reigning BWT Champion Greg Long (USA) led the field with back-to-back solid scores in Round 1 Heat 1 and was the first surfer to secure his place in the Semifinals. Long set the pace for the opening heat of the event by picking off multiple right-hand barrels to earn a 20.01 heat score (out of a possible 30).

Albee Layer (HAW) secured a 12.83 heat score and the second position. Kai Lenny (HAW) and Gabriel Villaran (PER) battled for third place, but it was Lenny who showcased full commitment as he pulled into a deep barrel and edged out Villaran by only 3.10 points.

“The waves are really good right now and there are a lot of corners if you know where to sit,” Long said. “I actually deliberately rode a much bigger board than I ever do out here. There is a lot more volume so I could cover the ground that I needed to. It is something new for me, but in a heat if you can’t catch a wave, nothing else matters. My strategy was to keep moving around wherever it was clean and I locked in four waves.”

2014/15 BWT Champion Makuakai Rothman (HAW) charged through Heat 3, with Pedro Calado (BRA) and BWT veteran Carlos Burle (BRA) close behind. Rothman, last year’s BWT runner-up, locked in a near-perfect 9.50 and a solid 7.80 back-up score. Calado fired with an excellent 9.07 and 6.93 to earn the second position. With only 0.29 points between Burle and event wildcard Angelo Lozano (MEX), Burle’s 23.56 heat total was enough to advance to the Semifinals.

Jamie Mitchell (AUS) netted the highest single-wave score of Round 1, a perfect 10.00, with an extremely technical barrel ride in Heat 4. Mitchell’s final heat tally, a near-perfect 29.03, was the highest of the day, earning him the heat win and a place in the Semifinals. The bout also saw high-scoring rides from local wildcard Jimel Corzo (MEX) and Rusty Long (USA), who will also progressed to the Semifinals.

“I think we were all worried about the fourth heat with the wind coming up, but I think we scored the best conditions of the day,” Mitchell said. “The tide was dropping, the winds stayed glassy and the swell was peaking. I found an early right hander and nearly made it out, which put me into a good rhythm. I found that left and didn’t think I was going to make it, but somehow I pulled out of that. It was an historic day. Incredible surf and incredible barrels.”

For more information, log onto WorldSurfLeague.com where the Puerto Escondido Challenge will be webcast LIVE.