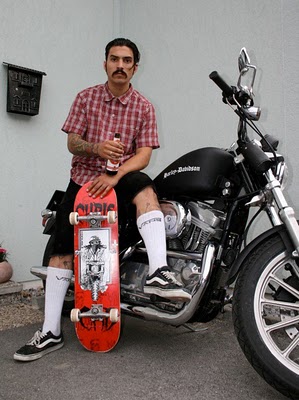 Ok, so let me introduce theGoodLife rider, Chris Cab. As he says, he left social security for the rock and roll lifestyle. It fits him well, he charges on a skateboard and snowboard, rides a Harley and has Homer Simpson on his wrist, as well as his dog. That’s in Ink, in case you were wondering. From good old South African stock, this guy has been representing in Austria since his youth.

So Cab gets picked up by Monster Europe, tunes them he wants to come down to SA for the Snow Jam at Canal Walk – a great big Mall –  and 3 days later, he is on a plane to my couch, in LLandudno, for 3 weeks. Like I said, Rock Star. hahaha

Cab went big on the small rail and jump, landed a one footer in the flats and damaged his back – no more surfing for you till you leave bud! He takes it in his stride though, got more pissed thinking that he might not get home because of the airport closures in Europe. Already macked his seat to first class – he is “Injured” badly and needs to lie down. For real!

A few quik questions with Cab –

K: Who are you really?
C: I would say the Devil, but greatest trick the Devil ever pulled was convincing man he did not exist!

K: Why Rock and Roll?
C: Why not… hahaha Some people call it Electro I call it bullshit!

K: Whats your inspiration?
C: Life – and the depths of hell (I am picking up a metal trend here…)

K: Who supports you?
C: Anyone who has a couch for me (That’s me then.) Monster Energy, Vans, Electric, Altamont, XDouble,Vestal, Grounded Europe and the guys who invented Cream Soda, Black Label and Chutney Chips.

K: Whats next?
C: A shitload of snow and two road trips through Europe and the USA (God help those poor seppos.)

We got some skate footage, the snow footage, Cab surfing – me thinks you will see a sweet section in the next theGoodLife DVD. So take some inspiration from the Cab – life is short, have a good time!