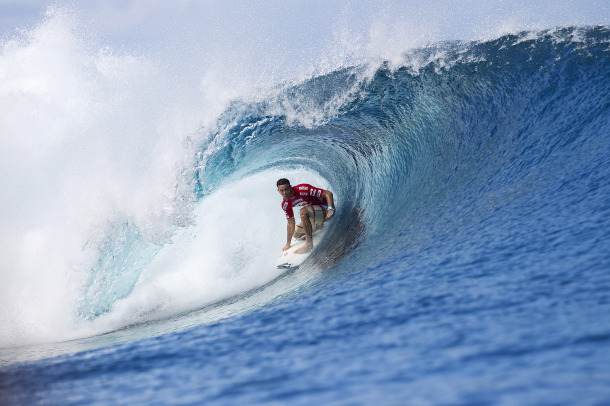 Wow, I am absolutely frothing for this event. Not only are we heading to the one wave on tour that can break dreams faster than Wok judging a ladies surf event, but we have one hell of a title battle on our hands for the World Tour. Quietly sitting up top going about his business is, Mick Fanning. The already 2 time World Champ knows his business, but wihthout a win this year, he knows it is time to put a number 1 on his results list.

Sitting in second and third are Kelly Slater and Joel Parkinson, both of whom have already hit 5 perfect tens this season in competition. Probably good to mention that 3 of those for Kelly were at macking 10ft Cloudbreak… Parko is on form though, with the win in Bali and a Semi final in Fiji. Many were hating on his Bali win, but the judges love him and he has a solid track record in Tahiti.

Sitting in fourth and with everything to prove, my man, Jordy Smith. Life is good for the big guy right now! Engaged, the crowds love him and most of the surfers on tour are petrified to get him a heat. He exudes power and confidence this year and will be wanting more than anything to prove himself at the one wave he still needs a result. No easy run for him though as he comes up against good mate and fellow Saffa, Travis Logie, in Round 1 and danger wildcard Alain Riou. Remember how his title run 2 years ago came to an end? This is Jordy’s opportunity to really step up and ensure that he is the number 1 contender for that World Title. Win at Teahupoo, go into number 1 and fly to Trestles knowing the whole tour are terrified of you! (On a side note, Jordy is the number 1 Surfer on the 1 World ranking! Confused, dont worry, everyone is.)

These are your danger men and there are plenty of them, starting with Nat Young. Sitting in 6th in his rookie year and with a solid performance at Cloudbreak, most will want to avoid the goofy footer. Both of the Hobgoods will always be dangerous out at Chopes and you can also sling the Tahitian, Michel Bourez in there, as the Spartan’s form this year has been excellent and he charges backhand tubes. My feeling is that Sebastian Ziets will be a dark horse and with his Hawaiian pedigree will have no problem in the Tahitian lineup. Freddy P is another dangerous low ranked surfer with plenty heat wins out there. Getting a last minute wildcard slot, look to Nathan hedge causing some upsets! The Hog is charging hard and got in due to injuries to a whole bunch of tour surfers. He has won the event in the past…

Lastly, John John Florence has to be in your pickings! The kid is back from injury and absolutely ripping. Even Kelly does not want to come against him at Teahupoo. He is my number 1 pick. Just check his video below…