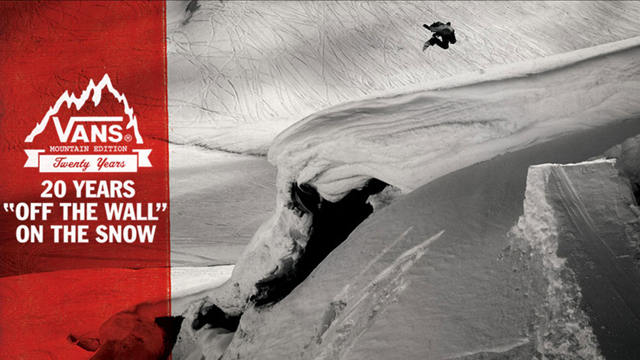 Since the day Snowboarding moved away from hard bindings and into soft botts and lumo clothing, Vans have been there. This is a pretty dam cool look back at the last 20 years and the good times, deep powder and anarchy that has been part of the journey.

Vans presents 20 Years: Off the Wall, On the Snow, a definitive retrospective film honoring over two decades of Vans Snow heritage, filmed and directed by respected filmmakers Mike Hatchett and Travis Robb of Standard Films.
20 Years takes a look back at an influential era in snowboarding, paying homage to a pivotal period in defining a new generation of snowboarding culture as told by original Vans riders Shaun Palmer, Circe Wallace and Kurt Wastell. Reminiscing on years of style, innovation and true originality, Hatchett’s passionate narrative tells the history of Vans on the mountain, encapsulating the humble beginnings of the snowboarding industry along with the people who continued to progress the sport into the culture it is today.
20 Years features the unique perspectives of the Vans global snowboarding team such as Pat Moore, Jamie Lynn, Darrell Mathes and more, as well as iconic Vans athletes including legendary skater John Cardiel and big wave surfer Nathan Fletcher.

20 Years: Off the Wall, On the Snow from Vans OffTheWall.TV on Vimeo.